I have mild excema and in an attempt to improve it I went to see a nutritionist last year as recommended by Mary B.  Her name is Gaye Godkin and she is excellent, I’m not so excellent though – I followed her recommendations (which really were not difficult) for some time but I’ve slipped back into my old ways of late so I must start eating more sensibly again!

She recently posted this recipe on her Facebook page – though with no instructions or measurements just basically ‘made a sauce with x y z then added a bit of this and that’.  It looked lovely though and I fancied something light – obviously I added some wine and bread to my meal, not very light or healthy but they did compliment the dish perfectly 🙂

I gave it a go – below is what I used, it was very easy, and really really tasty. I didn’t use chickpeas on this occasion – Colin had a bad experience with them recently and he’s not over it yet, but I might slip them in next time!

It was my first time using fennel (I had to google how to chop and prepare it… the shame).  I wasn’t sure about it, I’m not normally mad on aniseed so I only used about 1/3 of a bulb, but there was not a strong flavour from it in the final dish so I’d definitely add more the next time!  The guy in front of me in the supermarket queue got very excited when he saw it, told me how much he loves fennel and that he would often eat it raw. I’m not quite there yet….

The weather here has been terrible.  It hasn’t been very cold, but it’s been very dark and very very wet, it has felt almost like night time all day long.  Unusually however the weather gods decided to save up the sunshine for the weekend which was nice!  And even nicer it spilled over onto Monday which was a holiday (for some of us!).

I sit in my office today (Tuesday) and it’s grey, dull, and wet outsite, also our heating is broken so I’m freezing.

But the weekend was lovely, it was cold, bright, sunny and full of autumn colours.  Yesterday was 11th November and was a public  holiday in Belgium, although as many of my friends and loved ones work for one or other of the various European Instituions who do not have the day off it was a bit of an odd holiday!

I had a lovely day though, after a run in the morning, a bit of toast with the last remnants of Sylvia’s Ginger and Rhubarb Jam I went and met her for a coffee and then we took a stroll down to Bois de la Cambre where we walked for about 2 hours. 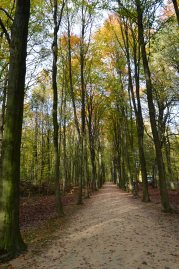 After that we stopped in Cafe de la Presse for some lunch, which was lovely and warm and cosy.  We spotted a friend and his son strolling by so we strolled home with them.

By the time I got home the cold had run through me so no better way to warm up than spending some time in the kitchen.  My Mam had sent me this recipe the week before so I gave it a bash and it turned out very tasty!

Come Dine with me, by Jane and Gill

Well – we tried. We tried to have our own Come Dine with Me experience.

Unfortunately, we were the only episode if I recall correctly.

But the food was good – if I do say so myself.  It was my first real experience of lentils and I’ve made that part of the dish several times since on it’s own as it was so easy and tasty!

We also served it with mashed potatoes.  There was an almost disaster there which involved using a hand held blender and finishing the cooking in the microwave – lesson is: Always make sure you have enough time to fully steam your spuds!

For the Puy Lentils

For the cucumber garnish

Sporadic musings on Art, Theatre and anything else that affects my culchie soul - Follow me @brosie8 on Twitter for more

Magazine of a Storyteller... articles about world cultures, travel, and recipes with a twist and tango ♪ ♪ ♪ ...

A mother in the city

Life with kids in Brussels

MontgomeryFest
Come Here To Me!

Adventures of a London Kiwi
One Life. Two Clubs.

the story of Belgium GAA

We're the biggest GAA club in Europe, with over 100 members playing in all 4 codes: Hurling, Camogie, Men’s and Ladies’ Gaelic football. New members are always welcome, so why not give it a try! Email us on pro.belgium.europe@gaa.ie

Cooking my way through 100 Cook Books

Travelling with a demanding wife

when only the best will do

Bringing New Orleans to the world, one plate at a time

a locals guide to the best restaurants in Brussels