Well I recently mentioned the event I attended at The Hotel organised by Brussels Food Friends.  It was really enjoyable and inspiring (who isn’t inspired whilst eating cake?).  I won’t say much more about it as it was written about much more eloquently than I could by several others already so READ ALL ABOUT IT as they say…here, and here, and here.  And if anyone is interested in attending the next one watch this space!

Thank you Sylvia for suggesting it – look how happy we were: 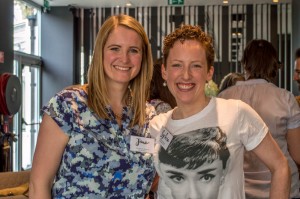 So yes I started this blog to try and get Mary to give me recipes – she is a busy woman so they have been few and far between, but I’m hoping to get a few more from her! After a while I just thought why not use it as a place to keep recipes I have used and liked, so I remember to make them again and they don’t get lost in space and time…

I know I am very lucky with the amount of travelling I get to do, if it isn’t with work it’s with Belgium GAA, one is free, the other is not – but both are filled with activities that are not very touristy such as … well … work and playing sports.  It does mean you get a taster of a place and that you might like to go back to some time in the future so it’s important to keep a list of places you stayed, restaurants you visited etc so it sounds like you know what the hell you are talking about if/when you ever do go back, or indeed recommend it to somebody else!

Of course, on the odd free weekend I do just travel for pleasure, and that’s what we did a couple of weeks ago when we went to the island of Terschelling in the north of Holland.

You need to get a ferry to the island, and these ferries go from Harlingen, which is about a 3 hour drive from Brussels (more if you decide to go on the day when the Trade Unions are protesting in Brussels…)

From Harlingen, which is a cute little town itself, you can take the ferry which is run by this company: Rederij Doeksen.  Their logo is a smiling seal – I liked.

There is a fast ferry and a slow ferry, we got the slow one over as we arrived too late for the fast (snel) ferry, it takes 2 hours and the fast one just 45 minutes.  I’d suggest calling the Ferry company to get the times as the website said something different to what was actually running.

Here is the slow ferry…

Once you get there, there is a bus service which seems to run very efficiently and cost less than 2euro each way.

We stayed at the Walvis Vaarder Hotel.   It was lovely I would highly recommend it. Especially for the amazing open fire in the bar, the funky font used for the room numbers and the tasty local cheese: 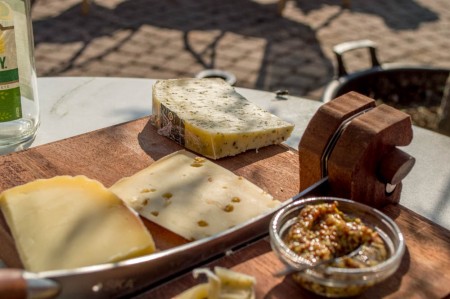 We hired bikes for a very reasonable price and cycled all day in the sunshine!

As it turned out this was taking place while we were there: http://www.fjoertoer.nl/.  We weren’t 100% sure what it was but it involved alot of walking during the night, and alot of jolly Dutch people!

We managed to catch the fast ferry back on Sunday and were back in Brussels at a very civilized hour so I had time to make Jamie Oliver’s Chicken and Mushroom Pie.  Now, this is from his 30 Minute Meals book.  I’m doooobius as to whether it is possible to make any of them in 30 minutes, he tells you to do things ‘quickly’ alot, and also suggests using the food processor for everying including chopping mushrooms and spring onions.

Now this might be quicker to do, but it takes alot longer to wash a food processor than a knife!

All the same, it is still quick and easy to make… and tasty

Jamie serves it with some peas and mashed carrots which are very tasty, I might stick them up at a later date.

I stir-fried some brussels sprouts, courgette, brocolli, corn and caramelised onion – it was an experiment and it was tasty! 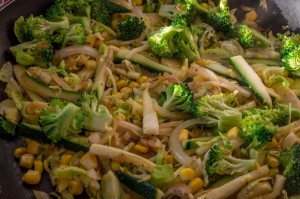 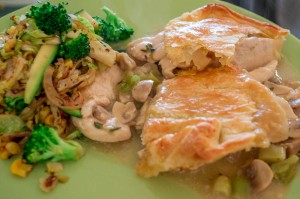 Sporadic musings on Art, Theatre and anything else that affects my culchie soul - Follow me @brosie8 on Twitter for more

Magazine of a Storyteller... articles about world cultures, travel, and recipes with a twist and tango ♪ ♪ ♪ ...

A mother in the city

Life with kids in Brussels

MontgomeryFest
Come Here To Me!

Adventures of a London Kiwi
One Life. Two Clubs.

the story of Belgium GAA

We're the biggest GAA club in Europe, with over 100 members playing in all 4 codes: Hurling, Camogie, Men’s and Ladies’ Gaelic football. New members are always welcome, so why not give it a try! Email us on pro.belgium.europe@gaa.ie

Cooking my way through 100 Cook Books

Travelling with a demanding wife

when only the best will do

Bringing New Orleans to the world, one plate at a time

a locals guide to the best restaurants in Brussels